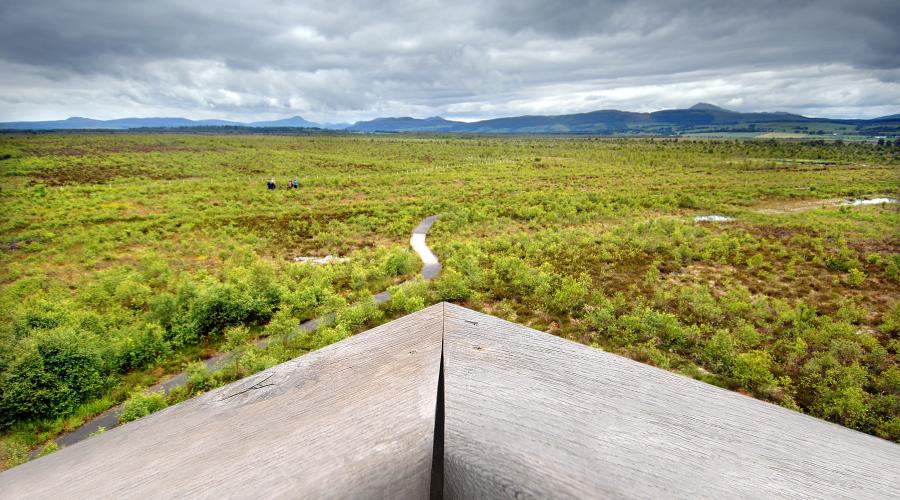 NatureScot is urging gardeners to choose alternatives to peat, now that garden centres have opened up around Scotland. Digging up peat to use in a garden destroys wildlife and releases carbon into the atmosphere, accelerating climate change, as well as increasing flooding in areas where it is dug up.

NatureScot’s Flanders Moss National Nature Reserve is an amazing example of what can happen when peatland is restored. Over the decades, it has been transformed from a dried up, dying bog into a thriving, sodden peatland bursting with all kinds of unique plants and insects – as well as some resident nesting ospreys.

The reserve is celebrating its 40th anniversary this year, and since the early 1990s, NatureScot has carried out massive amounts of work to restore the reserve to its original watery state p. About 40 km of ditches have been dammed bringing the water table back to the surface. This has jumpstarted the proper peatland vegetation, with sphagnum and cottongrass taking over from heather.

“Gardeners are now faced with a wide range of growing mediums, as well as all kinds of pot-grown plants. Unfortunately, peat is a common and popular choice. But you don’t have to use peat. There are some excellent peat-free gardening alternatives.

“It’s best to check any packets and sacks to make sure that they specify they’re peat-free. If it doesn’t say that, then it will likely have peat in it. Your purchasing choices have the power to change products and save peatlands. If you can, an even better choice is to make your own growing medium by home composting.

About 5.5 million cubic metres of peat have been saved at Flanders Moss, locking up a lot of carbon which has then not been released into the atmosphere, where it could have contributed to climate change. As well, all those water-filled ditches hold onto rainfall and release it very slowly, helping to reduce flooding on the low-lying Carse of Stirling.

David added, “Peat harvesting is a term used for digging up peat. This makes it sound like the peat grows back, so it can be harvested again. And in fact it can grow back – but only at the rate of one mm a year, and that’s only if the conditions are right! In theory, Flanders could be harvested again – in about 5000 years’ time – providing it was left to grow unchecked. So peat is not a sustainable choice for gardeners.

“Flanders Moss is such a special place now rich in wildlife and enjoyed by thousands, after so many years of effort. But it could have easily ended up damaged and reduced, or even completely removed, like so many bogs are even today, for use in our gardens.”