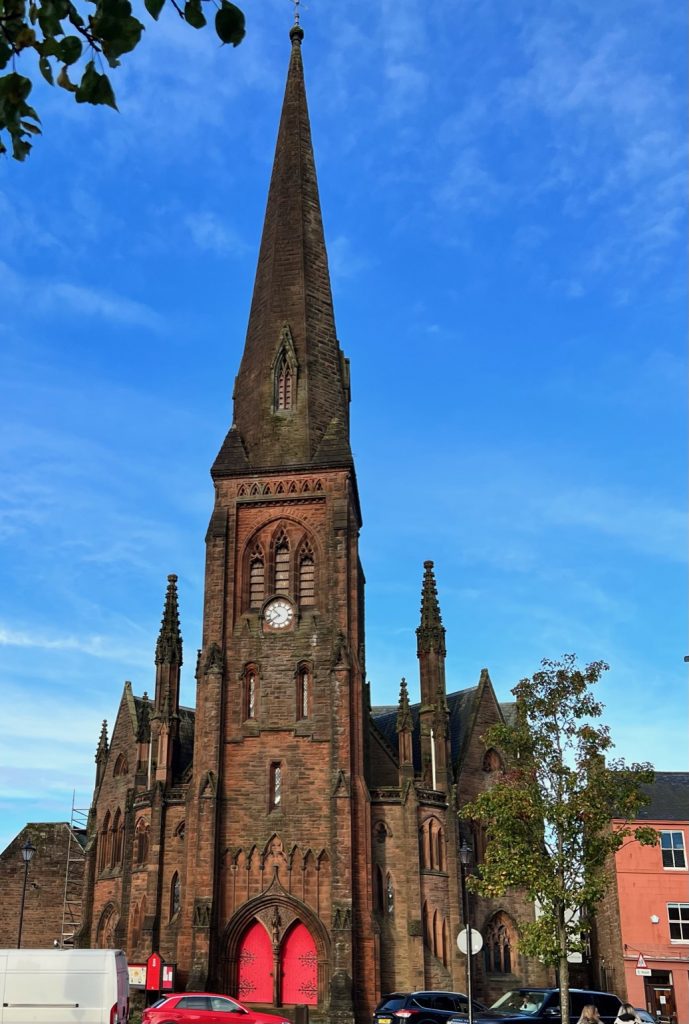 Following discussions of the St. Bride Anglican Church community during which it was decided that the congregation would move to different premises, the congregation has sought a new occupant for the iconic Gothic Revival Burgh Church in Church Crescent, central Dumfries.

Acting on the wishes of the St. Bride’s congregation to maintain the building in ecclesiastical use, the Rev’d Andrew Crosbie has spearheaded an effort to find another Church community who would make fitting use of the space. To that end, the decision was taken to transfer the ownership of the building to the Diocese of the British Isles, an old calendar Orthodox Christian diocese with missions throughout Great Britain and Northern Ireland in communion with ISTOC (the International Synaxis of True Orthodox Churches).

Greyfriar’s is to be dedicated to the Virgin Mary and St. Ninian, in honour of the history of the site and the local area. A regular schedule of services will be undertaken by the Dean, Fr. Augustine Parker, and by the Church Porter Elliot Davies. The Diocese, under the guidance of the Rt. Rev’d James Cavendish, Orthodox Bishop of Whithorn, will also use the location to start up a charitable initiative in the town under the heading the Lambros Charalambous Philanthrolic Initiative. ‘Although we are yet but a small presence’ says Bishop James ‘we hope that our charitable activities will serve the people of Dumfries, and all of our clergy involved very much look forward to working with various faith leaders and charities in Dumfries so that the new community at Greyfriar’s can do its part in bringing relief and the works of mercy to the local population’.

A handover ceremony of the Church, followed by a blessing of the Church by the Bishop of Whithorn, along with opening of the Lambros Charalambous Philanthropic Initiative, to which Her Majesty’s representative the Lord Lieutenant , the Provost of Dumfries, and other dignitaries have been invited, will take place at the Church Steps at 11AM on the 29th of Dec, 2021. Food parcels will be distributed to those wishing them. All are welcome to attend.

More information about the Diocese and new community at Dumfries can be found at:
https://www.metbritain.org/cathedral

COUNCIL FACILITIES ACROSS DUMFRIES AND GALLOWAY START TO RE-OPEN