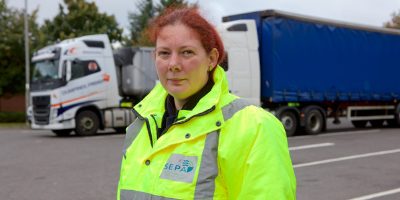 The Scottish Environment Protection Agency is warning of a new trend in waste crime after two abandoned trailers full of waste appeared in the central belt in recent weeks. Investigations are being undertaken by SEPA to establish the source of the trailers which could lead to the prosecution of those responsible.

While illegally depositing waste in fields, barns and premises is a known issue SEPA is working to tackle, these findings indicate a new, emerging trend in waste crime in Scotland and follow on from another trailer found towards the end of 2020. Similar instances of waste being placed into trailers and being abandoned at roadsides and industrial locations has been seen in England over recent months.

Working with Police Scotland and other partners through the Joint Unit for Waste Crime, SEPA has been tracking this growing trend across the UK since last year, but three trailers in as many months indicates this may now be a new disposal route for waste criminals in Scotland.

SEPA is reminding landowners to be alert to the risk of  their land or premises being used for illegal waste deposits. Trailer or vehicle owners should also be aware of the risk of theft.

Communities are asked to be vigilant and report any suspicious trailers left by the roadside or in isolated areas as soon as possible. If alerted to it early SEPA has a better opportunity to step in and take action, along with partners like Police Scotland and local authorities. The longer it takes to identify trailers the more chance there is agencies will lose access to essential evidence to help track the perpetrators.

SEPA is also warning the criminals involved that their activities are firmly in the spotlight and compliance with Scotland’s environmental laws is non-negotiable. Illegal waste disposal and fly tipping is a serious offence with significant consequences and those caught risk a criminal conviction and a fine of up to £40,000 and/or imprisonment.

The distinctive form of illegal waste disposal saves criminals thousands of pounds in waste disposal costs, but the costs to others may be high. Vehicle or landowners are likely to incur the costs of having waste removed and disposed of legally, which can be considerable.

“A high proportion of individuals or companies that are involved in waste crime are also associated with other criminality and this activity has continued during the pandemic. SEPA continues to work closely with partners, often through joint initiatives such as the Joint Unit for Waste Crime, to ensure we can maximise our collaborative efforts to have the greatest impact and ultimately stop this type of highly adaptive and lucrative waste crime.

“In addition to causing serious pollution putting communities at risk, and placing further stress on legitimate operators – as well as on the public services that have to deal with it, waste crime impacts investment and economic growth. Serious and organised waste crime is estimated to cost the UK economy at least £600 million a year.

“That is why we are appealing to anyone who may have any information about these lorry trailers, no matter how significant it may seem, to get in touch with SEPA as soon as possible. Similarly, if they see any suspicious trailers left by the roadside or in isolated areas they should report it to our 24 hour pollution line using the online form at sepa.org.uk/report or by calling 0800 80 70 60.”

As well as reporting suspicious activity, members of the public can help tackle waste crime by refusing to engage the services of people who are not authorised.

“Remember, services that sound too good to be true often are, and could lead to your waste being illegally fly-tipped or disposed of by other illegitimate means,” Shearer explains.

“Anyone offering to take your waste away should be able to provide a waste carrier registration number and tell you the named facility they will take the waste to – if they can’t provide this information, don’t allow them to take your waste.

“Now more than ever, we all need to play our part in correctly managing our waste. You have the responsibility to take care of your waste and if we trace it back to you we can take enforcement action against you too. We don’t want people to be put in that situation so make sure that anyone who takes your waste for disposal is properly accredited.”

“The costs incurred in removing these two trailers and disposing of the resulting waste has cost the local authority many thousands of pounds. This is money which has had to be diverted away from key critical front line services such as social care and education. If people think that this type of incident doesn’t cause harm or does not affect anyone, then they should think again and we will continue to work closely with our colleagues within SEPA and Police Scotland to identify those responsible.”

“This worrying new trend demonstrates the lengths determined criminals in our sector are prepared to go to for monetary gain and highlights the continued need for well-resourced and collaborative enforcement that can adapt to new criminal behaviours. It also serves as a reminder that waste producers must exercise their duty of care to stop waste material from falling into the wrong hands.”

16 YEARS FOR MURDERER OF MAN IN LOCKERBIE PUB TOILET