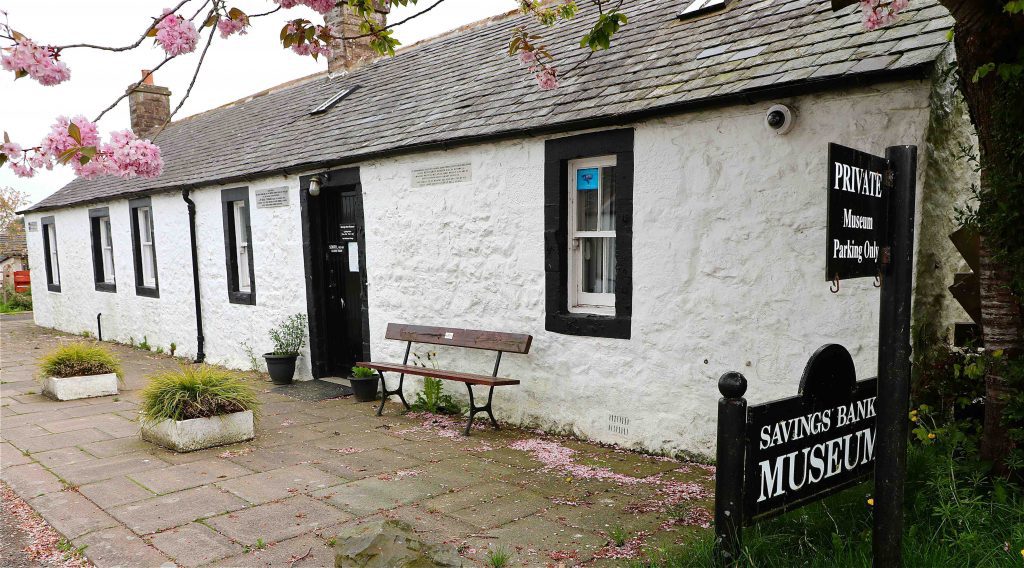 Following discussions with the local community over the past three months, TSB has agreed, in principle, to transfer the Savings Banks Museum in Ruthwell, to Comlongon Estate Limited which is ultimately owned by Professor David Thomson and Miss Teresa Church.

Comlongon Estate Limited is part of a group of companies that already has several tourism and hospitality businesses in the area, including the award-winning  Annandale Distillery, Annan, and the historic Globe Inn, Dumfries.

Final terms are being discussed, but this agreement in principle is a significant step forward in safeguarding the museum’s long-term future in Ruthwell. In discussions with TSB and the local community, Professor Thomson and Miss Church have pledged significant investment to improve, consolidate and expand the visitor experience at the museum.

Housed within the site of the original Ruthwell Parish Bank, the museum contains a range of historically significant artefacts as well as a collection that traces the life of the Reverend Dr Henry Duncan, considered by many to be the ‘father’ of the worldwide savings bank movement.

David Thomson and Teresa Church said: “We initially became involved in community plans to preserve the Savings Banks Museum at the request of several local people who were familiar with what we’d undertaken at Annandale Distillery and The Globe Inn. It was never our intention to take on the museum, but having recently acquired Comlongon Castle, which has a historical relationship with the Savings Banks Museum and Henry Duncan, we re-considered our position when approached by several parties.”

“We believe  that much could be achieved by re-uniting these three cornerstones of local history. Now that this proposal has been agreed in principle by all parties, we can start work on securing and enhancing the museum’s long-term future, and we look forward to doing so.”

“I was absolutely delighted when I learned that David and Teresa have agreed, after engagement with the local community, to take on the Savings Bank Museum at Ruthwell and the remarkable collection telling the story of the movement’s founder, the Rev. Henry Duncan.

“They have a tremendous track record of protecting, restoring and enhancing our area’s historic built and wider heritage as can already be seen with their meticulous restoration of Annandale Distillery and, more recently, their work at The Globe Inn in Dumfries, with its Robert Burns associations.

“Now that David and Teresa have acquired Comlongon Castle, also in Ruthwell Parish, with all its connections to Henry Duncan, their custodianship of the savings bank appears almost a perfect solution.

“I look forward, as local MP, to supporting them in any way I can.”

South Scotland MSP Colin Smyth said: “Having campaigned to save the museum from closure and crucially retain the important collection locally, I’m pleased that’s been secured. The story of the birth of the savings bank is of international importance, but it’s a story that started in Ruthwell and it’s important it continues to be told there. I think there is huge potential to capture the public imagination through the museum but also the wider life of Reverend Duncan, so I’m excited by the ideas Teresa and David have. They have such a fabulous track record of creating world class visitor attractions that do justice to our local history and I am grateful for their commitment to the future of the museum. I welcome the fact that TSB has listened to local concerns and worked with the community to find a way forward, but it’s important that the community of Ruthwell continues to be involved in shaping the next chapter of the story of the Ruthwell Parish Bank because this is ultimately their community’s history.”

TSB spokesperson Andrew McIntyre commented: “We are delighted to have reached an agreement with Comlongon Estate Limited. We remain proud of TSB’s heritage and are grateful to David, Teresa and the local community for working collaboratively to find an agreeable way to celebrate the the life of Henry Duncan.”