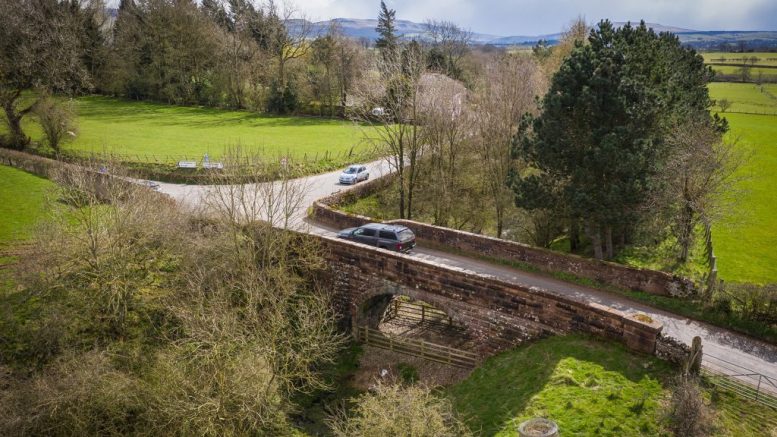 Plans to link two Cumbrian heritage railways could be sunk unless objectors convince a local council to reject a planning application to make the infilling of a Victorian bridge permanent.

For 27 years, the Eden Valley and Stainmore railways have been working towards the relaying of five miles of track between Warcop and Kirkby Stephen. But last year National Highways buried a stone arch bridge at Great Musgrave in more than 1,600 tonnes of aggregate and concrete, blocking the route.

Since 2017, inspections had found the structure to be in fair condition, with only a handful of minor defects. Repointing open mortar joints – costing around £20K – would have enabled the structure to carry 40-tonne vehicles, but an engineer employed by the state-owned roads company told Eden District Council that infilling was needed “to prevent the failure of the bridge and avert a collapse”. Inspection reports contradicted this claim.

The work was carried out during May and June last year under powers intended for emergency situations presenting a threat of death or injury, with the material allowed to remain in situ for no longer than 12 months. The Council has insisted that planning permission must be obtained for retention beyond this period. National Highways has now submitted its application, with a decision due by 27 May.

Infilling set taxpayers back £124K and, according to an internal review, National Highways now believes that restoring the bridge for rail use could cost as much as £431K.

Mike Thompson, Project Manager for the Stainmore Railway Company, said: “Our longstanding aspiration to reconnect with our friends at the Eden Valley Railway offers the potential to provide a much-needed boost to the area’s economy. It was always going to be a challenging project with obstacles to overcome, but the unnecessary infilling of Great Musgrave bridge has made it so much more difficult and costly.

“National Highways didn’t consult with us about their plans for the structure. Now though we have the opportunity to make our views known and we hope that democratic process will result in the right outcome. We believe infilling conflicts with the Council’s policies on new development, biodiversity, landscape character, green infrastructure and heritage assets, as well as the protection of dismantled railways under consideration for reopening.

“We ask anyone who recognises the importance of our wonderful railway heritage – and its value for future sustainable transport use – to object to National Highways’ planning application. This was a fine, historic structure in good condition. What they did to it was nothing short of vandalism and they can’t be allowed to get away with that.”

National Highways has made a public commitment to remove the infill if it is the last obstruction to the railways’ reconnection, but campaigners say the company cannot be trusted to honour it, being neither legally binding nor enforceable.

Graeme Bickerdike, a member of The HRE Group which is trying to halt a nationwide infilling and demolition programme of legacy rail structures, said: “National Highways contrived an alternative reality at Great Musgrave whereby a bridge that was in good condition became a threat to public safety. But the claim that it might fail and collapse was not supported by any evidence.

“Whilst ever it remains infilled, this structure will stand as a monument to the company’s destructive culture and unwillingness to tell the truth. It needs to show positive intent around its management of the Historical Railways Estate, remove the infill and re-establish this engineering feat as a valued heritage asset within Cumbria’s landscape, ahead of it being brought back into use.

“The opportunities presented by Great Musgrave bridge must not be lost, so we trust the Council will reject National Highways’ attempt to make the infill permanent.”

Eight months ago, the Government paused all further infilling schemes due to the controversy caused by the work at Great Musgrave, however the programme is expected to resume later this year. Many civil engineers criticised National Highways for inflicting shame and embarrassment on their profession.

Objections and comments about the Great Musgrave application can be submitted online via Eden District Council’s planning portal, searching for case reference 22/0254.

Walker Rescued After Being Swept Over Waterfall the Grey Mares Tail